Tim Perez, James Stroud and Ken Feeley published a new Perspectives article in Science Magazine entitled “Thermal  Trouble in the Tropics”.  The article explains why tropical species are at extra risk of extinction under climate change compared to their temperate counterparts.  They also discuss the need for additional studies of tropical plant species and their climatic tolerances. A copy of the article is available HERE.

Ken Feeley discussed the article during a radio interview with John Batchelor.  A podcast of the interview is available to download or listen to HERE. 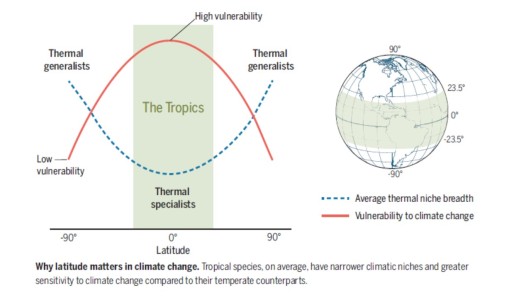 A new publication from the Feeley Lab in Frontiers in Ecology and Evolution addresses the importance of priority effects on species range shift. The publication is a comment to a paper published in Nature by Alexander et al (2015).

There is a growing appreciation of the need to understand the effects of climate change on species interactions and how changes in interactions can influence the ability of species to persist in the face of climate change (Araújo and Luoto, 2007; Thuiller et al., 2008; Svenning et al., 2014). However, empirical or experimental studies investigating species interactions under climate change remain extremely scarce. Alexander et al. (2015) use experimental transplants of European alpine plant species and communities to provide valuable insight into some of the novel competitive interactions that may emerge as species migrate upslope to keep pace with rising temperatures. More specifically, they look at performance of plant species under simulated upslope migrations into preexisting higher-elevation plant communities as well as the performance of plant species that fail to migrate and find themselves competing with new suites of species migrating into their community from below. This is a useful approximation of some of the scenarios that are already being created by the unequal responses of species to climate and the creation of novel communities.

One limitation of the study by Alexander et al. (2015) is the omission of the earliest phases of establishment when processes such as dispersal and germination are crucial in the encroachment of initial populations of migrant species into the new locations (Hampe, 2011). In particular, the experimental set up fails to account for one of the potentially most important drivers of community assembly—priority effects. Priority effects refer to the observation that early colonists will often inhibit, or alternatively facilitate, the establishment of subsequent colonizers (Connell and Slatyer, 1977).