Evan is moving immediately into a position as a postdoctoral researcher with J. Savidge based out of Colorado State U. but working on Saipan Island to study the effects of bird loss (due to invasive brown snakes) on seed dispersal and vegetation composition and dynamics (see HERE for more information about the project).

Brian is going to focus on writing a book that expands on his dissertation research and discusses the environmental and health impacts of human carnivory (i.e., eating meat).  He will also keep working with Yonanas, the fruit “ice cream” maker that he invented.  Brian plans to stay involved at FIU and will keep dabbling in research.

We are very proud of both Brian and Evan!  Congratulations to both of them on all that they have done and for all that they will do! 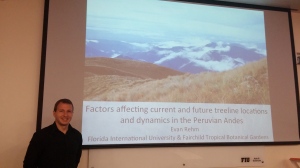 The role of agriculture and food consumption in tropical conservation 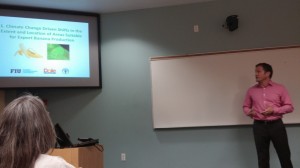 A growing human population, shifting human dietary habits, and climate change are all negatively affecting global ecosystems on a massive scale. Expanding agricultural areas to feed a global population predicted to reach 9 billion drives extensive habitat loss, and climate change compounds stresses on both food security and ecosystems. Understanding the negative effects of human diet and climate change on agricultural and natural ecosystems provides a context within which potential technological and behavioral solutions can be proposed to help maximize conservation. The purpose of this research was to (1) examine the potential effects of climate change on the suitability of areas for commercial banana plantations in Latin America in the 2050s and how shifts in growing areas could affect protected areas; (2) test the ability of small, inexpensive unmanned aerial vehicles (UAVs) to map productivity of banana plantations as a potential tool for increasing yields and decreasing future plantation expansions; (3) project the effects on biodiversity of increasing rates of animal product consumption in developing megadiverse countries; and (4) estimate the capacity of global pasture biomass production and Fischer-Tropsch hydrocarbon synthesis (IGCC-FT) processing to meet electricity, gasoline and diesel needs. The results indicate that (1) the overall extent of areas suitable for conventional banana cultivation is predicted to decrease by 19% by 2050 due primarily to hotter and drier climate, but all current banana exporting countries are predicted to maintain some suitable areas with no effects on protected areas. Several countries are predicted to experience large net decreases in the extent of areas suitable for banana cultivation while others are predicted to experience large net increases in the extent of suitable areas; (2) Spatial patterns of NDVI and ENDVI were significantly positively correlated with several metrics of fruit yield and quality, indicating that UAV systems can be used in banana plantations to map spatial patterns of fruit yield; (3) Livestock production is the single largest driver of habitat loss, and both livestock and feedstock production are increasing in developing tropical countries where the majority of biological diversity resides. Reducing global animal product consumption should therefore be at the forefront of strategies aimed at reducing biodiversity loss; (4) Removing livestock from global pasture lands and instead utilizing the biomass production could produce enough energy to meet 100% of the electricity, gasoline, and diesel needs of over 40 countries with extensive grassland ecosystems, primarily in tropical developing countries.

1 thought on “First two to defend!”